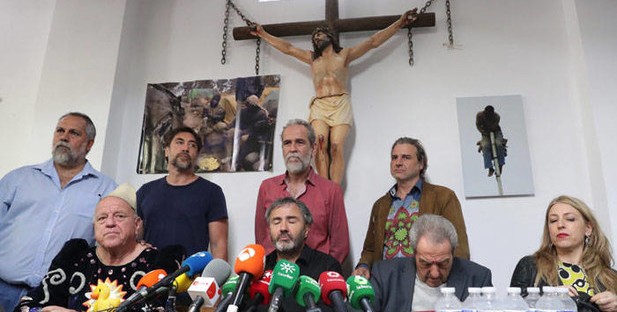 On a breezy afternoon in May, actors Guillermo Toledo and Alberto San Juan were sitting on the stage of the Centro Pastoral San Carlos Borromeo, which is better known as Iglesia Roja (‘’The Red Church’’) for its affiliations with marginalized groups and its interesting track record of serving as the speakerphone for extreme leftist groups and providing a free space for reivindicative calls against the system. It is unclear with how much time in advance they were able to secure a spot on the panel for another actor who is also known – particularly here in Spain – for his political outspokenness – Oscar winning-actor Javier Bardem entered the conference hall of Centro Pastoral and – courteously yet firmly – signaled with a hand at both San Juan and Toledo indicating where they should be seated. Although his presence could have been initially conceived as a sign of his unwavering commitment to helping voice issues of concern for the beleaguered working class (he made the deference gesture of seating on one side of the panel table, his mere presence seemed to have been designed to help create more clout for the press.

The reason for holding this event was none other than protesting Toledo’s being summoned by the court to testify regarding the controversial tweets that he wrote where he denounced the arrest of three young feminists for leading a protest procession during Easter 2017 in Madrid holding a giant vagina. The procession was called ‘’La Procesión del Coño Insumiso’’. The Justice department found that the procession was an utter offense to the religious sentiment of the community. Upon discovering about the arrests, Toledo wrote: ‘’I take a s##t on the Virgin Mary and I still have some more s##t to spare for Christianity as a whole’’. Toledo has never – either publicly or privately – apologized for his tweet, using the rationale of freedom of speech.  Having Bardem there, in such an iconic place for Madrid’s most radical groups – far away from all the glitz and glam of Hollywood and his smiles on the red carpet – was a vivid reminder that Bardem’s private persona was more clearly identified with the leftist agenda of his native Spain.

Toledo has often complained that his career has taken a dip allegedly as a consequence of his controversial statements. His appareance at the Red Church may be a further example of a desire – or a predisposition – on his part to build up a character that he may have been able to devise in a fictional life.  Considering this, it is unclear whether he is embracing this circumstance and making a charcter of sorts out of his public pesona or this is merely an accidental perception on the eye of the beholder.

The event was unathorized by the President of the Episcopal Conference on the grounds that the center was a religious center and therefore, it was not the appropriate venue to hold what really came to be a press conference of a political nature – particularly, considering the fact that the space was used to defend such blasphemous actions. It is ironic that Willy Toledo denounced a suppression of fundamental rights at a center that spread the Word of Jesus Christ, the very entity he felt entitled to dedicate blasphemies to. It is equally ironic – if not downright disconceting – the fact that Javier Bardem felt more compeled to rally around those causes he deemed unfair in his native country, while he kept quiet at the trove of cases  of social injustice that served as the counterpoint to the opulence and garish lifestyle of Hollywood of which he was somewhat a part of.

In a recent interview for El Mundo, Toledo took a powder and decided to qualify his previous statements by saying that he was baptized – implying that, after all, he came from a religious background – and that he and his family had had friends from the clergy for all their life. He simply thought that nobody should face the prospect of facing time in prison for saying things that could be deemed as offensive. He then went on to establish a reasonable fact – saying something or calling for sor something to happen is not the same as acting upon it or making that happen. He admitted that what he might have said could offend certain quarters of the population who might not share his views, but that should not be enough reason to be summoned to testify in front of a judge. His rationale, however, stumbles into one small – but important – element that made his argument lose its way – his vituperativeness constituted an attack on freedom of religion just as much as a homophobe exercises his hate-fueling rage when he or she attacks homosexuals.

It’s mystifying how Toledo – whose profession entails the embodiment of people from all walks of life (albei fictional) and who should, on general principle, aspire to a more humble appreciation of those who are different – is uncapable of doing just that, by showing an utter lack of tolerance towards the conservative, the God-fearing. Someone who is from the left should not want to generate hate and should not fan any public anymosity against any religious sentiments. Someone who proudly -and loudly – claims to be from the left should know better.